Picture This: How We Frame Issues Matters for Social Change
This multi-part series presented in partnership with The Communications Network, the FrameWorks Institute, and leading organizations explores how framing profoundly influences our understanding of social challenges, and how we think and talk about potential solutions.

Fifty years ago, on the day after Martin Luther King, Jr. was assassinated, President Johnson implored members of Congress to ask themselves, “What more can I do to achieve brotherhood and equality among all Americans?” The most immediate answer, he said, was to enact legislation that would ban discrimination in the sale, rental, and financing of housing. Five days later, the US House of Representatives passed the Fair Housing Act.

While the law was certainly a big step forward, we have much farther to go. Today, millions of families across the country still struggle to afford a home that is safe, healthy, and connected to the resources they need: good schools, jobs that pay living wages, safe and reliable transportation, and high-quality health care. One in six families in the United States spends more than half of their income on housing. This often forces families to forego other necessities, including food and medicine. Others—some 600,000 Americans on any given night—live on the streets or in homeless shelters.

Housing insecurity is not evenly distributed across the population; it disproportionately affects people of color, older people, and those living on low incomes. As rents continue to rise and wages continue to stagnate, more and more working families are finding it harder to find high-quality, affordable homes. By 2025, the number of families that spend at least half of their income on rent will reach 13 million—an increase of 11 percent over 2015 levels, according to recent projections.

Housing and community development advocates understand that high-quality, stable housing is central to the health and well-being of all families. It helps foster relationships and opportunities in communities, limits chronic stress, and allows families to support positive child development. Research shows that substandard housing, on the other hand, contributes to injury and illness, such as asthma, heart and lung disease, and cancer, while poor neighborhood conditions can make it harder to play and exercise outdoors, buy healthy food, and access good jobs, schools, and transportation. Ultimately, if we hope to address inequity, whether by race, class, or age, we must address America’s affordable housing shortage.

And yet, the lack of affordable housing doesn’t rank high on public perceptions of pressing national problems, and lawmakers have failed to adequately address it. To gain traction, catalyze stronger investments in community-led solutions, and scale-up programs that work, we need to spark a different conversation. 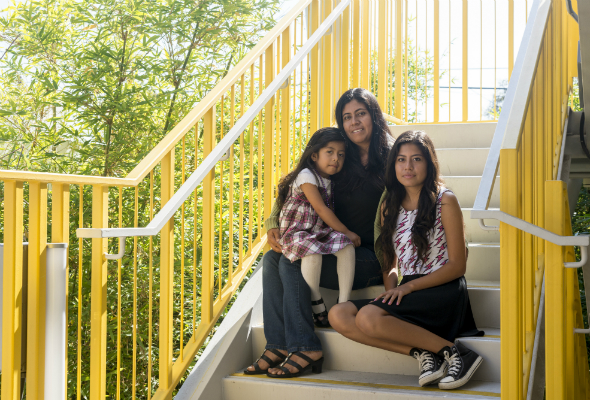 Residents of High Place West, an affordable housing community in Santa Monica, California, supported by Enterprise Community Partners and other partners. The apartments are available to low-income families earning up to 60 percent of the area’s median income. (Photo by Gabor Ekecs)

Over the last three years, the FrameWorks Institute and Enterprise Community Partnershave been working together to strengthen the affordable housing sector’s capacity to shift public thinking and mobilize action. As part of this effort, we have conducted research on how we might talk about affordable housing in a way that moves public thinking and increases support for the changes necessary to address this issue.

We have found that most people see housing as an issue of consumer choice. From this perspective, housing is a marketplace where individuals try to maximize value through purchases from producers who are out to maximize profit. This leads people to view housing quality as a simple function of cost: Some people can afford high-quality, healthy housing, and some simply can’t.

Many people see differences in housing quality as an inherent feature of this market, and even as inevitable; differences in affordability and access indicate that the market is working as it should. This perspective allows people to rationalize disparities in housing quality and justify the fact that so many people in the United States live in unhealthy, unsafe, and unstable housing situations.
We have also found that people see housing affordability in terms of wildly rising costs—like a train that has jumped its tracks and is picking up speed as it careens toward inevitable crisis. This leads to fatalistic views about the ability to address affordability: If housing costs are out of control and destined to climb, then increasing affordability is an impossible dream. Affordable housing becomes almost laughable, unworthy of serious policy consideration, and people direct attention to other social problems they think might actually be solvable.

As a result, advocates have difficulty building support for policy solutions, such as stronger tax incentives for affordable housing and community development in neglected communities. Even though these solutions are grounded in research, have been shown to be cost-effective, and have broad impacts in the communities they’ve reached, messaging can still backfire. NIMBYism (the well-known acronym for “not in my backyard”) is one of several entrenched beliefs that derail conversations.

Stories told in the media and by housing organizations themselves often reinforce unproductive ways of thinking, such as the idea that housing is a matter of individual choice, and that better decision-making and more conscientious planning will remedy problems. While the latter are important solutions, they won’t solve our affordable housing shortage. Public thinking is also primed by what media and advocacy stories don’t say. These stories often fail to explain why housing is increasingly out of reach for many people, or the societal benefits of creating and preserving affordable housing.

If we don’t explain the structural causes and consequences of a lack of affordable housing, we allow the view that the housing market is beyond human control to go unchecked. Journalists and advocates who assert that “housing costs are rising” or discuss the “affordable housing crisis” are not helping connect the causes of the “crisis” to the effects on the ground.

So how can we change the frame and shift how people think and what they are willing to do to achieve better housing for all?

First, we must be careful with the language of “opportunity for all.” When presented with the idea that everyone should have the opportunity to live in high-quality, affordable housing, research participants responded in surprising ways. For many, the idea of “opportunity for all” triggered thinking about housing as something individuals earn and deserve rather than as a fundamental human right. In other words, everyone does not have the right to high-quality housing if they haven’t earned and can’t afford it.

When people see housing with this lens, they reason that the opportunity to obtain high-quality housing already exists; it is up to individuals to work hard, earn money, and make good decisions so they can take advantage of it. The opportunity for all to access high-quality housing is not an inalienable part of American Dream, the logic goes; it is the reward claimed by those who work hard and make the right decisions.

Second, we must highlight the systems that create and enable equity. Messages that are explicit about the structural causes of housing inequities and the need for structural solutions—that show how systems often determine outcomes—are more effective at getting people to see housing as an important issue and be more supportive of policy change. Unlike emphasizing that people with low incomes or other disadvantages deserve the opportunity for high-quality, affordable housing, this framing explains that systems change can open up greater opportunities for everyone.

When put in this context, the public is more likely to view changing land and zoning regulations to build more affordable homes, providing financial benefits for developers to build more affordable housing options, and creating tax deductions for rental payments as appropriate and effective solutions. Enterprise Community Partners has taken this work to heart. It is aiming to help affordable housing advocates show how systems produce inequities and to bring into focus the specific ways these systems must change. We believe doing so can mobilize people to address systems rigged to benefit the few and step on the many.

As the wealth gap in America widens, the full vision of the Fair Housing Act and the dream that underlies it may seem may seem less achievable than ever. But we can and must find new pathways forward. Changing how we talk about affordable housing for all will not, in itself, rewrite the future. But it is an important part of reaching that dream. It is time to change the story we are telling about housing in America and why it matters. The good news is we have a better understanding of what keeps Americans from connecting to this issue, and we are building the tools to frame a different, more powerful story.

Tiffany Manuel is vice president of knowledge, impact, and strategy at Enterprise Community Partners, Inc., an organization that improves communities and people’s lives by making well-designed homes affordable. She drives the collection and dissemination of data and information from within Enterprise and across the affordable housing industry through innovative solutions that demonstrate achievable impact.
other related stories